Settlements consist of Jewish communities that were established in areas that came under Israeli control after the 1967 war (Sinai Peninsula, East Jerusalem, West Bank, Gaza, Golan Heights). Today, when people talk about settlements, they are mainly referring to those in the West Bank (Judea and Samaria). Prior to this war, the West Bank was occupied by Jordan, who had annexed it in 1950, although only two countries officially recognized this. In 1967, Israel annexed East Jerusalem and unified it under Israeli authority. East Jerusalem is different from the West Bank in that Israel has never annexed the West Bank. Under the terms of the Oslo Accords, the West Bank is now divided into 3 areas: Area A, Area B and Area C. Area A (~20%) is under full civil and security control of the Palestinians. This area includes the major Palestinian cities (Nablus, Ramallah, Bethlehem, most of Hebron). Area B (~20%) is under Palestinian civil control and joint Israel-Palestinian security control and has Palestinian villages but no Israeli settlements. Area C (~60% of the West Bank) is fully under Israeli civil and security control and includes all of the Israeli settlements, including those around Jerusalem. Most of the settler population exists within the main “settlement blocs.” These main settlement blocks (Ma’ale Adumim, Gush Etzion, and Ariel) are areas with a high density of settlement communities. Settlement activity, particularly in the West Bank is a very contentious issue. The recent UNSCR 2334 re-affirmed the International Court of Justice ruling that all areas beyond the 1967 border are illegal. Currently, there are more than 400,000 Israelis living in the settlements/communities built on land taken in the 1967 war, and if you count East Jerusalem, there are more than 600,000 Israelis. Currently, since Israel has not annexed the West Bank, residents of settlements maintain their Israeli citizenship, but Palestinians living in a similar area are not Israeli citizens and thus subject to different laws.

Discussions focused on the legality and legitimacy of the settlements, whether any could remain, and whether they would remain under Israeli or Palestinian sovereignty. 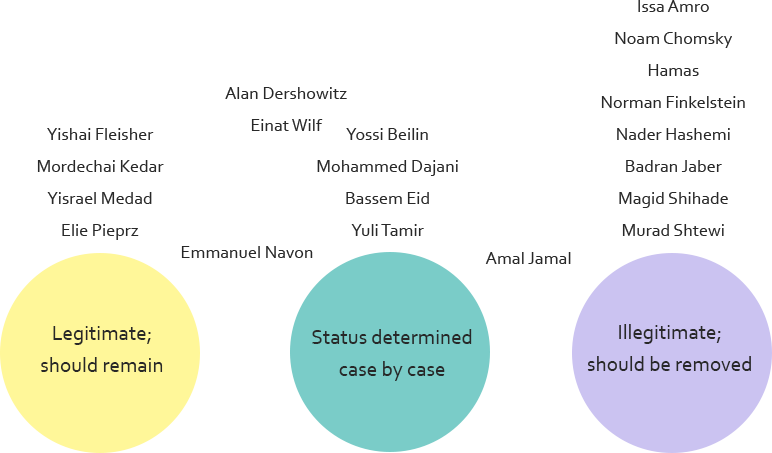